Attendees cheer a statement about justice for immigrants Feb. 16 during a the opening program of the U.S. regional World Meeting of Popular Movements in Modesto, Calif. (CNS photo/Dennis Sadowski)

Midway through the U.S. Regional Meeting of World Popular Movements in Modesto, California, a strong wind came up which almost blew off the metal protections of the roof of the beautiful new gym where we were meeting at Central Catholic High School.

The force and the noise of the wind reflected the force and noise of the gathering of over 700 inter faith delegates of community organizations from around the United States, with some international representation also. The force was a powerful wind of strong voices calling for the popular movements to be sowers of change, protagonists for social justice, and bold leaders of action in bringing down the walls that divide the struggles against the systems that Pope Francis mentioned in his letter of greeting to the gathering.  The Pope wrote about being confronted by “a system that causes enormous suffering to the human family, simultaneously assaulting people’s dignity and our Common Home in order to sustain the invisible tyranny of money that only guarantees the privileges of a few.”

Many voices then spoke from diverse perspectives but shared the urgency of being one people in one fight (one ‘witness’ as Cardinal Peter Turkson called it) “to rebuild society in which every person is seen as fully human, has a full voice in the decisions that shape their lives, and is able to thrive and reach their human potential.”  The noise was that of great enthusiasm for “disrupting oppression and dehumanization” as Bishop Robert McElroy, Archbishop Jose Gomez, and others spoke about and “rebuilding” systems that promote and protect justice in ownership of land, for working people, in housing, for immigrants, and in ending racism. One might wonder why the meeting was held in Modesto, California, and not some large city easily reachable by modern modes of transportation. The answer simply is that the planners felt that the great Central Valley in California provided a location that reflected the challenges being faced all over the country.

The Central Valley is one of the richest agricultural areas in the world but struggles with issues of water, clean air, higher unemployment, lower wages, thousands of annual migrant farm workers, large percentages of immigrant peoples, human trafficking, homelessness, and a host of other social issues including violent gangs, hunger, school drop outs, etc.   But at the same time there are so many who live in the Central Valley who want to make life better for all who live and work there. The Regional Meeting received a warm welcome and recognition by those who knew about its purpose. What made this meeting different from other church or community gatherings? 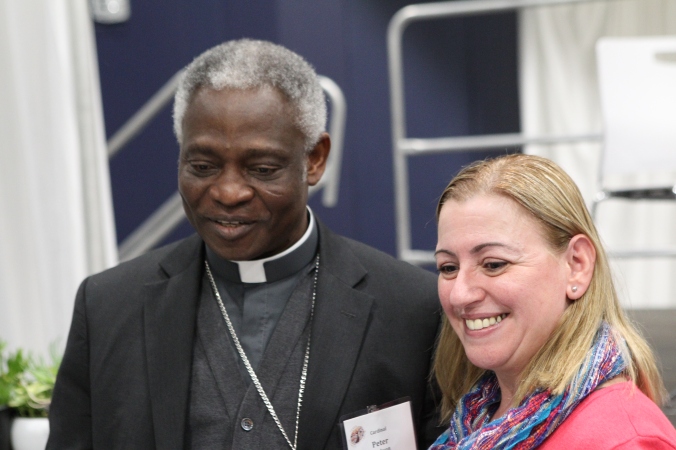 Cardinal Peter Turkson, prefect of the Vaticans Dicastery for Promoting Integral Human Development, poses for a photo Feb. 16 with Lira DeMoraes, a volunteer with the Merrimack Valley Project in Massachussetts at the start of the U.S. regional World Meeting of Popular Movements in Modesto, Calif.

It was the first time in the United States that community organizers from across the land were invited by the Church to come together so that the Church might hear from the people experiencing exclusion, dehumanization, and the pain of poverty.  Pope Francis had previously convened three World Meetings of Popular Movements. He spoke at all three about overcoming the globalization of indifference by “placing the economy at the service of peoples; working for peace and justice; and defending Mother Earth.” To this regional gathering in the United States the Pope sent a written greeting wishing that the “constructive energy” of this meeting “would spread to all dioceses, because it builds bridges between peoples and individuals…that can overcome the walls of exclusion, indifference, racism, and intolerance.” The Holy Father acknowledged with gratitude the sponsors of this gathering: The Catholic Campaign for Human Development; the host bishops from the three dioceses in the Central Valley; and Cardinal Peter Turkson, who leads the new Dicastery for Promoting Integral Human Development, and expressed his support of the popular movements.  What was different was that Catholic dioceses hosted and the Catholic Campaign for Human Development of USCCB sponsored the meeting, which was organized and run by the popular movements under the leadership of the PICO (People Improving Communities through Organizing) National Network and other organizing networks. Pope Francis highlighted PICO’s work for promoting this meeting.

Although representatives of the Churches did speak and were well received, the Church leaders, including over 20 Catholic bishops, were there to listen and to accompany participants in the dialogues.  The message from the delegates at the end of the meeting was addressed to the popular movements and leaders in the United States and globally and to the U.S. Conference of Catholic Bishops and Pope Francis. The message quoted Pope Francis and Catholic bishops extensively but also laid out the challenge, urging “our clergy and faith communities to speak and act boldly in solidarity with our people.” The message quoted Cardinal Tobin in his video address to the gathering that “faith leaders need to walk out in front and show that they are not afraid.” Pope Francis was indeed the inspiration for this gathering. Cardinal Turkson, by his presence and in his words, gave strong witness for the Church’s commitment to the integral development of the human person. Every human person has been created in the image and likeness of God, and full human development gives glory to God. 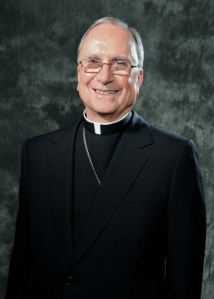 The Catholic Campaign for Human Development provides ongoing support for community groups that work to transform their communities. Visit our map to find out where this work is happening where you live—then get involved!

3 thoughts on “Sowers of Change, Protagonists for Social Justice, and Bold Leaders of Action”