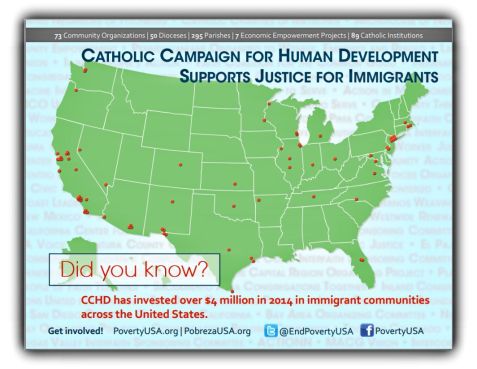 Pope Francis has a knack for punchy turns of phrase that get a point across. He’s saved some of his most poignant language to talk about immigration.

During his famous Lampedusa homily commemorating the immigrants who died at sea on their trek from Africa to Europe, the pope asked whether sometimes we’re all living in soap bubbles. When you’re in a soap bubble, you’re pretty immune to reality around you, and it’s easy to turn a blind eye to folks’ suffering. As Pope Francis put it, “it doesn’t affect me; it doesn’t concern me; it’s none of my business.” Perhaps by putting his finger on indifference, Pope Francis knew just where to start for a discussion about immigration.

Many of us cherish fond family memories and have a respectful veneration for the sacrifices that our immigrant parents, grandparents or great-grand parents made to come to America. Many of them did it according to the law, and maybe the law back then wasn’t as rigid and unforgiving as it is today.

Immigrants still come to our country for many reasons—to find a job and raise a family, to flee violence and war, to reunite with loved ones. Because today’s immigration law isn’t as accommodating as it could be, immigrants sometimes come with their suitcases full of dreams and anxieties but without the right papers. It’s easy to turn a blind eye and use allegiance to the law, broken as it is, as a means to keep from recognizing the humanity of a brother or sister in need. Like Pope Francis said, it’s easy to stay within our soap bubble and ignore our neighbor.

Over 11 million of our neighbors without the right documents can’t legalize their immigration status. Those neighbors live just outside our soap bubbles of indifference, in constant fear of deportation and tragic separation from family.

Where does CCHD fit in? The Catholic Campaign for Human Development is the national anti-poverty program of the Catholic bishops in the United States. For CCHD, the opposite of poverty isn’t wealth and affluence, but a community of solidarity. Solidarity dissolves soap bubbles and indifference. Solidarity means that our shared humanity, our shared dignity as children of God is greater than any identity of national origin.

This year, collaborating with 50 dioceses and nearly 300 parishes, CCHD is working to create communities where immigrants and non-immigrants live side by side in solidarity, in dignity and without fear. Through CCHD, the bishops recently invested more than $4 million in immigrant communities. There CCHD is promoting economic empowerment that benefits all, advancing comprehensive immigration reform, and building parishes, neighborhoods and cities where immigrant families and refugees can thrive.

There are lots of reasons that we might live indifferent to the suffering and fear of those around us today—the toxic political climate, anxiety over a bad economy, confusion about what we can do or just plain sin. Only solidarity can get us out of our soap bubbles of indifference; only the sacred memory that all of us together have been beneficiaries of the greatest amnesty of all, the forgiveness of the Cross.

Check out organizations supported by the Catholic Campaign for Human Development working for immigration reform.

2 thoughts on ““It doesn’t affect me; it doesn’t concern me; it’s none of my business!””